Blue Devils bring back “Pink Out” game for 2015

WHITE HOUSE – The White House Blue Devils will once again partner with Farm Bureau Insurance of White House and local agent Tal Plumlee to bring a “pink out” game to the 2015 football schedule.

In honor of Making Strides Against Breast Cancer and the annual October focus on breast cancer prevention and awareness by the American Cancer Society, White House will wear special jerseys on October 23rd in week 10 (ninth game) against Page High School. The Blue Devils this year will feature white jerseys with pink numerals, after last season’s pink jerseys were worn against Cheatham County.

It will be senior night, and the entire team will set aside the traditional blue for the second straight year. The jerseys feature pink numerals in black trim with WHITE HOUSE on the name plate and a pink ribbon under the front collar.

Jerseys will be auctioned/sold and distributed as game-worn after the game is complete. Parents of players have the first rights to their student’s jersey number; all others are open to the public or once the parent has declined the right to purchase the jersey.

Jerseys will be $50 each and unused numbers will be available at the Farm Bureau Insurance tent the night of the game. Checks should be made out to the American Cancer Society, and parents have until Wednesday, Oct. 21st to reserve a jersey. The remainder will be available to the public the night of the game. All proceeds go directly to the American Cancer Society.

From Farm Bureau of Tennessee:

In its third year as the statewide partner of the American Cancer Society’s Making Strides Against Breast Cancer, Farm Bureau Insurance of Tennessee surpassed the million-dollar fundraising mark. In 2014 company representatives made bigger and bolder strides than ever, contributing to a variety of fundraising efforts including bake sales, Making Strides walks and more than 32,000 pink Farmer Charlie hats sold.

The centerpiece of the 2014 campaign was 34 “Pink Out” high school football games hosted by Farm Bureau Insurance agencies across Tennessee. The games—played from the end of August through October—generated almost $300,000, uniting communities across the state to honor breast cancer survivors and educating people about the disease.

“To have raised more than $1,000,000 to benefit Making Strides Against Breast Cancer in only three years is truly unbelievable. This was made possible by the tireless efforts and generosity of Farm Bureau Insurance representatives. These proceeds will help the American Cancer Society seek better ways to prevent, detect and treat breast cancer, as well as provide help and hope to people facing this disease. I couldn’t be more proud of our company,” said Farm Bureau Insurance CEO Sonny Scoggins. 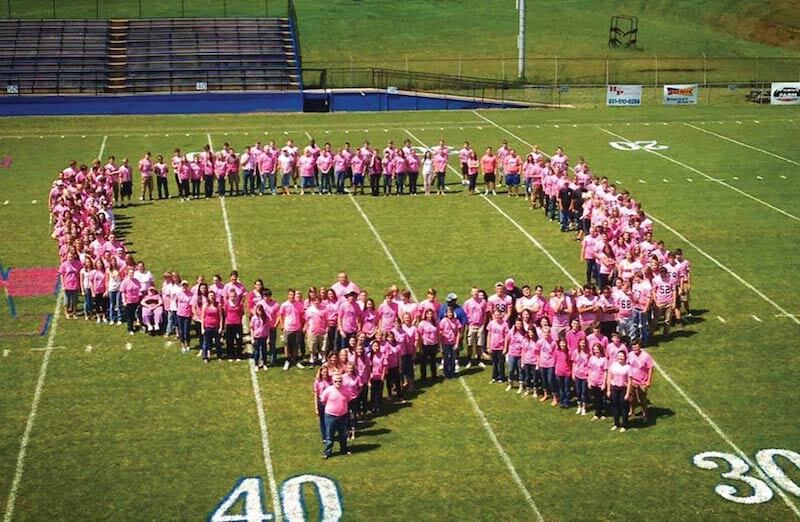