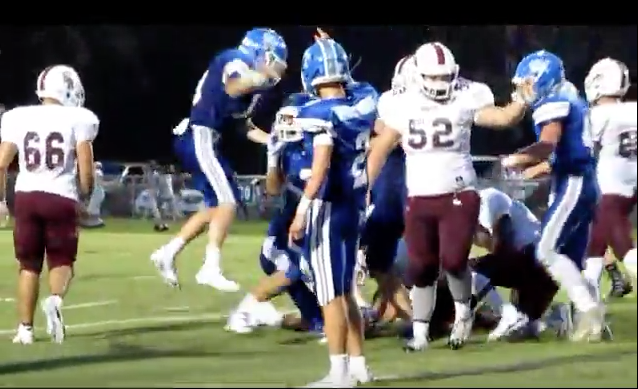 It was a contest 31 years in the making as the White House Blue Devils squared off against the East Roberston Indians to open the 2017 football season. The Blue Devils struck early and often on their way to a 35-0 victory to start the season.

The Blue Devils seemed stumped on their first offensive drive facing a third-and-eight when senior running back Seth Bumbalough ripped off a 25-yard run to keep the drive alive. White House jumped out to a 7-0 lead when junior quarterback Andrew Nixon found Bumbalough on a quick out for a 20-yard touchdown pass.

The visiting Indians looked poised to answer as a facemask penalty to the kickoff return set them up with fantastic field position at the White House 42-yard line. After converting on third-and-two, the drive stopped when Carter Hunt and Tyler McMurty teamed up to strip Indian quarterback Cameron Swift of the football. Hunt was also able to recover the fumble giving the Blue Devils the ball on their own 27.

The home team seemed primed for another scoring run, converting on a third-and-two. However, a holding call negated the first down and the home team was forced to punt. The Blue Devil defense was able to pin the Indians deep in their own territory. The home team pushed the score up to 14-0 on a 33-yard punt return.

The next Indian drive was cut short when Swift was intercepted by Miller Lowe giving the Blue Devils the ball on the East Robertson 26-yard line. Hunt scored again on a 15-yard touchdown run. A procedure penalty on the point after pushed the attempt back and was unsuccessful making the score 20-0.

The next Indian drive started off very promising as the Indians converted on third-and-one to keep their drive alive. The Indians seemed to put themselves deep into a hole with a personal foul penalty which put them behind the sticks. The Blue Devils provided a way out on the next play by committing a dead-ball personal foul of their own giving East Robertson a first down and allowing the Indians to move into Blue Devil territory at the 41.

White House would take advantage of the East Roberston miscues starting their next drive near midfield on their own 42. Two big plays put the Blue Devils into the end zone again as Will Frazer’s 20-yard run was followed by a 29-yard pass to tight end Curtis Palmer for a touchdown. Nixon took the ball in from three yards out for the two-point conversion edging the score up to 28-0.

East Roberston made progress toward scoring before the end of the half. Swift was able to draw the Blue Devils offsides on a hard count to give the Indians a first down on fourth-and-one. The drive ended with back-to-back sacks by junior defensive lineman Joey Cartwright. Two drives later White House took a 35-0 lead after a 20-yard run from senior Landon Deming.

Both teams got their reserved into the game in the second half. Neither team was able to score and the game ended 35-0.

“We wanted to try to create a side-to-side game, because they are really huge up front,” Coach Jeff Porter shared after the game. “It worked real well for us early in the game. We converted a third-and-eight with a jet sweep, then scored the touchdown on a wide play that got them moving a bit. It worked well for us in the game, and our defense played well.”

The Blue Devils will host Glencliff next week for Homecoming as they look to start the season 2-0.

One Comment on “Sumner HP: White House takes down Indians in season opener”