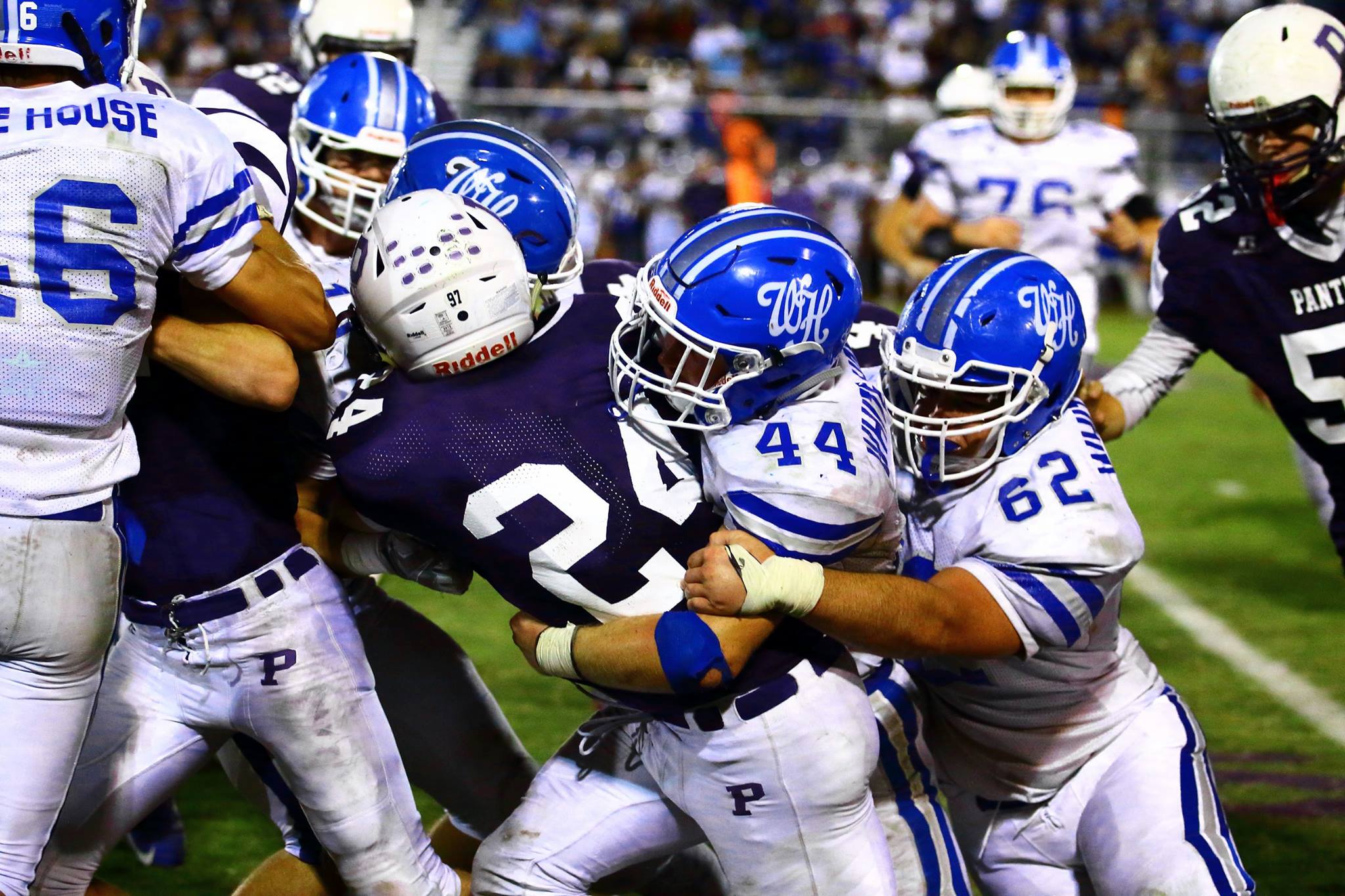 (PORTLAND) – Four White House players finished in double digits for tackles in the game Friday night, but no defensive play was bigger than the one just recorded as an incomplete pass.

Tyler McMurtry flushed Portland backup quarterback Brandon Meador out of the pocket on fourth down with 1:52 to go near midfield, turning the ball over to White House at their own 43 to preserve a 6-0 win over the rival Panthers. McMurtry grasped Meador, who scrambled to the White House sideline, and then hit him again on the throw that was broken up in the middle of the field by Eddy Walker.

White House (6-0, 2-0) ran out the clock and took a 25-24 series lead in the historical matchup dating back to 1943. It was the lowest scoring game in the series history and only the third shutout for the Blue Devils. Portland fell to 2-5, 2-2.

“It didn’t come easy, but I did not expect it to. They are a very good football team,” White House head coach Jeff Porter said. “They have a very tough schedule, and I knew that tonight would be difficult. I am very proud of our football team tonight because we struggle in some areas tonight and still found a way to get the victory.

“You can forget records when you get into this game because everyone is just going to play their guts out.”

Senior Josh Dailey and sophomore Colby Taylor both had 13 tackles, while Walker added 12 and McMurtry 10. McMurtry sacked the quarterback on second down to set up the game-ending defensive play, and also had a seven-yard tackle for loss in the game.

“Our backs were to the wall there in the fourth quarter, and Tyler came up with a big sack there,” Porter said. “I think we looked a little tired to start the game but that’s just the mental and emotional drain of getting ready to play a big game.

“We just kept playing and the kids bought in and we had a really good week of practice.”

Junior quarterback Andrew Nixon came off a career game last week to struggle in the first half, throwing three interceptions but finishing with 6-of-14 passing for 118 yards. But with two drives ending in on downs and an interception inside the 10-yard-line, the Blue Devils actually got on the board with a huge special teams play.

The Panthers held on fourth down inside the 10 and White House forced a three-and-out, but Seth Bumbalough returned Drake Vanatta’s punt 41 yards to the 4. Carter Hunt cashed in the touchdown to give White House a 6-0 lead on the final play of the first quarter. The PAT missed, but the score held.

“It was a great crowd tonight and I really give our kids a lot of credit,” Porter said. “This was a great night but we have to shed this one quick and we have a short week ahead.”

White House had 249 yards of total offense. Preston Sharber rushed 10 times for 51 yards, Will Frazer added 10 carries for 38, and Hunt six for 17. Brett Drake caught three passes for 70 yards and Eddy Walker two for 43 with Frazer adding the only other reception on a sideline screen.

Portland got the ball with 6:34 left in the game, trailing by six, and drove into White House territory. A controversial call at midfield almost turned the football over to the Blue Devils when Miller Lowe popped the ball loose on a Meador quarterback draw, but Meador was ruled down on the 13-yard gain.

Portland starter Caleb Mandrell was 2-for-5 passing for 26 yards and rushed eight times for 39 yards, but the 6-foot-2 sophomore signal caller left the game in the fourth quarter due to injury.

He was the Panthers leading rusher followed by Vanatta, with 13 carries for 32 yards, but overall the Panthers managed just 127 yards on 37 carries.

White House broke a two-game winning streak by the Panthers. Never before had the game been won in single digits, and it was the 49th meeting between the rivals.

The Blue Devils travel to White House Heritage on Thursday at 7 p.m. for the first time. Despite a 2-2 mark against the Patriots, the away games have been played at Vanderbilt Stadium and in their own home stadium at White House City Park. This will be the first year the game is held across town.

White House Heritage has yet to win a game in 2017 and sits at the bottom of Region 5-4A.

Portland, with wins over Heritage and Montgomery Central, remains in the playoff hunt with two region victories. The top four get in, and Portland still has to play Creek Wood and Springfield and needs at least one win to have a chance at the postseason.

White House is tied with Greenbrier with no losses in region play, but the Bobcats do have one loss outside the region. White House and Greenbrier do not play until week 11.

“The Blue Devil nation showed up loud and the crowd was great tonight, but we need them to join us across town and get ready for a big game Thursday night,” Porter said.