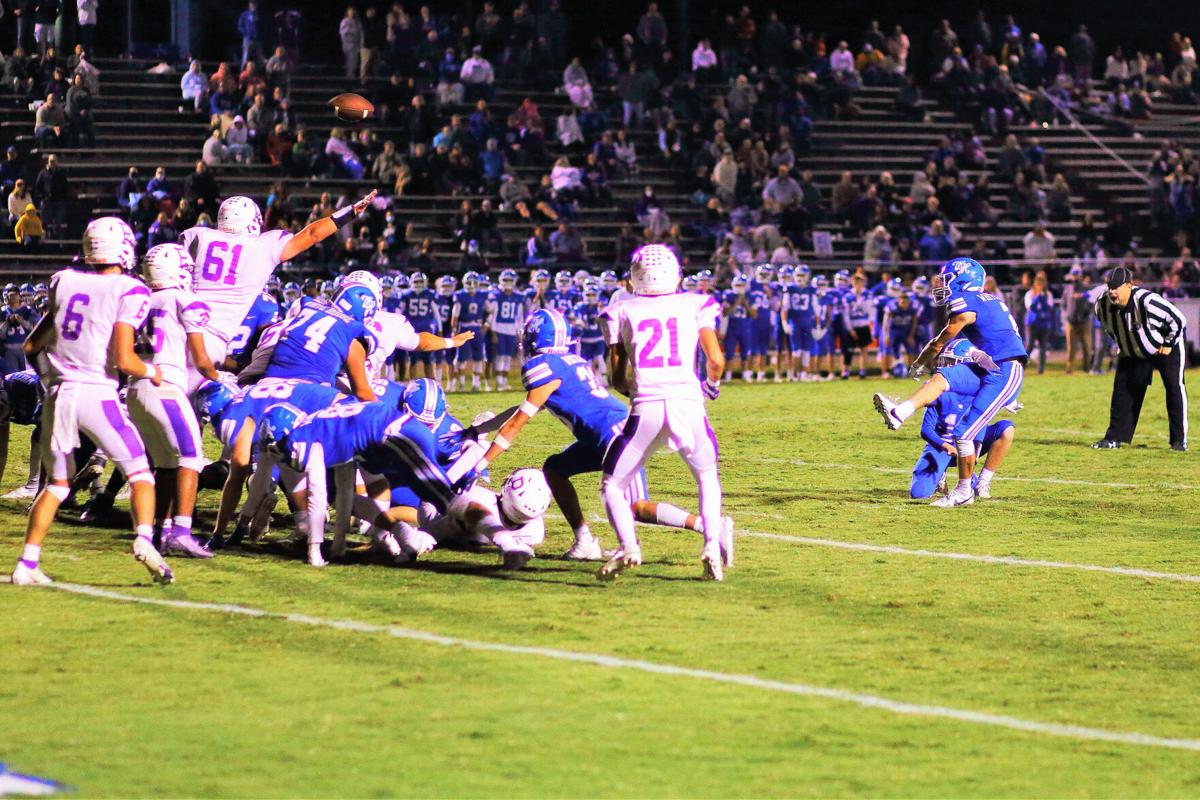 A 7-yard touchdown run from Ranen Blackburn and a successful extra point by Bryson Harper in overtime gave the White House Blue Devils a 32-31 win at home over their archrival and Region 5-4A foe Portland.

The win snaps a four-game losing streak for the Blue Devils, who were coming off a tough loss to Watertown last week.

“This win feels great for our kids,” White House coach Ryan Hamilton said. “They played their tails off and just kept playing, and that’s all we try to preach in practice. Just keep working, and good things will eventually come, and we’re glad they came tonight.”

Portland began the game with a strong start, jumping out to a 13-0 lead after the Panthers’ first two possessions. Both drives ended in touchdown runs from Devyn Fuqua.

White House finally made things interesting midway through the second quarter. Blackburn, who played quarterback the entire game, broke several tackles on a designed run for a 30-yard touchdown. The Blue Devils entered the half only trailing by six.

“We had a couple of bumps and bruises throughout practice and we figured it was best for our team if Ranen made the full switch to quarterback,” Hamilton said. “Our kids bought in and stayed on their blocks long enough to make creases for Ranen, and it turned out for the good.”

The second half saw four lead changes in a back-and-forth affair from both teams. White House took their first lead of the night on their opening drive of the third quarter. A fumble at Portland’s 5-yard line from Montrel Black after a 22-yard gain was picked up and taken into the endzone by Reece McAfee for a touchdown.

The Panthers responded by going on a nine-play, 80-yard drive, ending in a 17-yard run from Fuqua. However, a two-point pass by the Panthers was no good, keeping the score at 19-14. Missed extra points and two-point conversions by Portland would ultimately be the difference in the game.

A key moment for White House came late in the third quarter. A high snap led to a blocked punt by Portland, giving the Panthers the ball deep in Blue Devil territory with a chance to go up by two scores.

The White House defense stood their ground by not allowing a first down while stuffing Fuqua on a fourth-and-two run.

“We missed a couple of extra points, so I was a little antsy about kicking a field goal there,” Portland coach Greg Cavanah said. “We chose to go for it and gave it to our best back, but we just fell a yard short. White House stepped up and made great plays.”

The Blue Devils took advantage of the defensive stand. Blackburn hooked up with Harper for a 32-yard touchdown pass. A successful two-point pass form Blackburn gave White House a 22-19 advantage.

The lead was short lived as Portland needed only two plays for an answer. Dylan Gulley broke several tackles down the left sideline for a 51-yard run.

A missed extra point after the touchdown allowed White House to tie the game. A 9-play, 54-yard drive led to a 23-yard field goal by Harper with 11 seconds remaining to send the game into overtime.

Portland started the first overtime on offense and scored on a 7-yard run by Jalen Pero. However, the extra point was no good, leading to the game-winning plays by Blackburn and Harper.

“Late in the game we got really gashed by the quarterback on his runs,” Cavanah said. “We forced them to kick a field goal at the end of regulation, which was huge. I thought our kids approached the game better and fought to the end. It was just another great White House-Portland ballgame like every year.”

White House now improves to 2-4 and 1-1 in region play. The Blue Devils will host crosstown rival White House Heritage at home next Friday.

Portland falls to 2-5 and 0-4 in region play. Three of the Panthers’ five losses have come within seven points or fever. They’ll look to regroup at Trousdale County next week.