Posted on November 3, 2021 by whitehousebdp 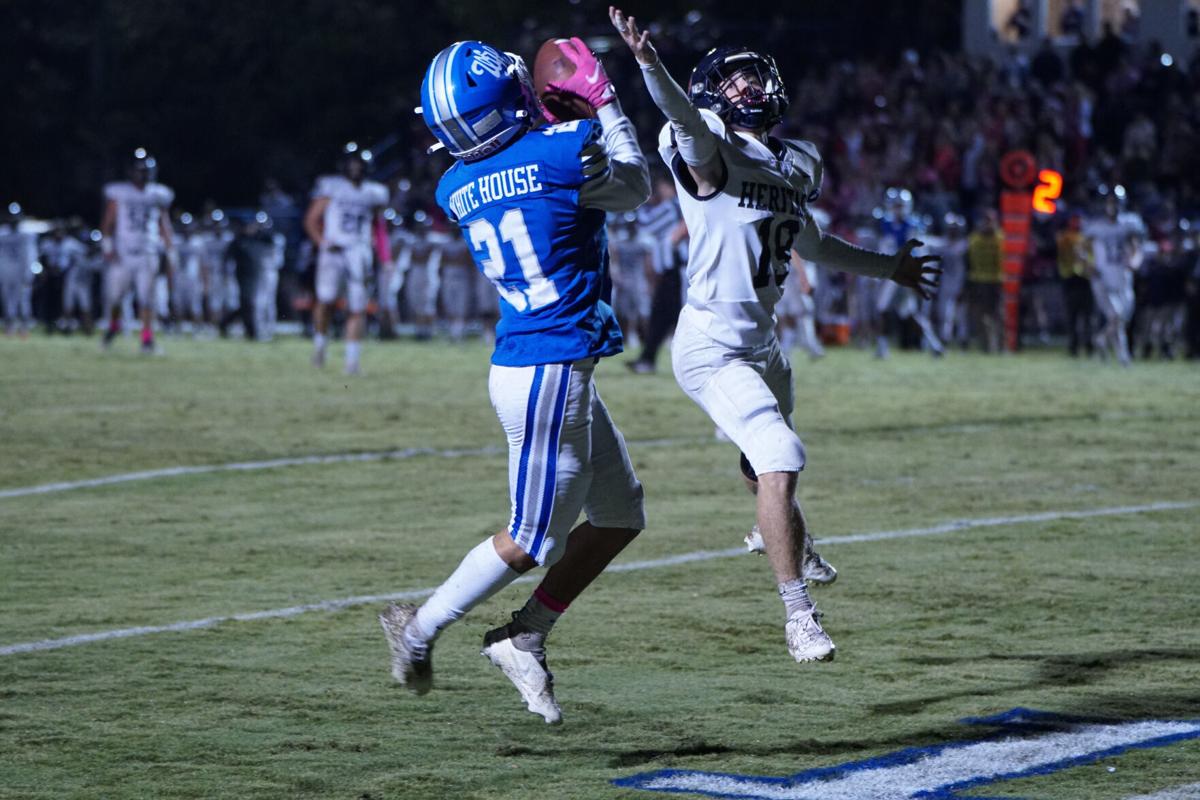 By Joel Clinger for The Robertson County Connection

Win or lose, the White House football seniors hold arm-in-arm and walk the length of the field at Dewey H. Whitson Stadium after their final home game each season.

For senior Reece McAfee, who has spent two seasons with the team, this group of players has meant “the world” to him.

“This is the best group of guys on a football team I’ve ever played with. 100 percent.”

McAfee has come on throughout the season as a big-play threat and a bell-cow running back. He carried the ball 14 times for 165 yards and four touchdowns.

Three of his touchdowns, including an 82-yard carry, came in the second half. McAfee said the Blue Devils seem to take control of their own destiny coming out of halftime.

“I think when we get into the locker room and we talk to the coaches, we just come to realization that it’s about us,” McAfee said. “We just got to do it. We’ve got to do it to win the game, and we’ll do whatever it takes.”

McAfee and senior quarterback Ranen Blackburn have both rushed for over 1000 yards this season.

Blackburn gained 151 yards on 21 carries Friday night, including his own rushing score.

Knocking off their rival on senior night could not have been any sweeter, but the team’s roots go far beyond the scoreboard.

“It means everything; they’re my brothers,” Blackburn said. “We’ve been friends since I can remember. We grew up together, and it’s really special.”

“Coaching, it’s not a job or anything like that to us,” White House head coach Ryan Hamilton said. “Our coaching staff, we love each other; we love the game. We love our school. We love everything about these kids right here and this senior class.

“We have good players, yes. We have a bunch of stats you can peg on them, but they’re nothing without the guy beside them. They understand that, and they appreciate that. That’s one of the most exciting parts, you know, for us to get to come hang out with them everyday.”

The White House seniors will play another home game Friday night, this their first home playoff game since 2017, but the Blue Devils took in the special moment Friday night before moving on to the next one.

“It’s awesome to play another game here at home, but right now, we want to enjoy this win,” Hamilton said. “If you don’t enjoy wins, you don’t get them as much, so it’s always good to enjoy a win. Then we’ll wake up and go back to work in the morning, and we’ll figure out about Stratford, and we’ll go to work for them.”

White House Heritage came in the decided underdogs, finishing fourth in the region, but the Patriots fought tooth-and-nail to the end. After falling down 28-14, they finished the game with two fourth-quarter touchdowns but ran out of time.

“We played with outstanding effort from beginning to end. We played with great enthusiasm, and as a coach, that’s what you want out of your guys.”

Heritage will travel to East Nashville Magnet Friday night for their first-round matchup.