White House jumps up early and cruises to first round win

Posted on November 6, 2021 by whitehousebdp 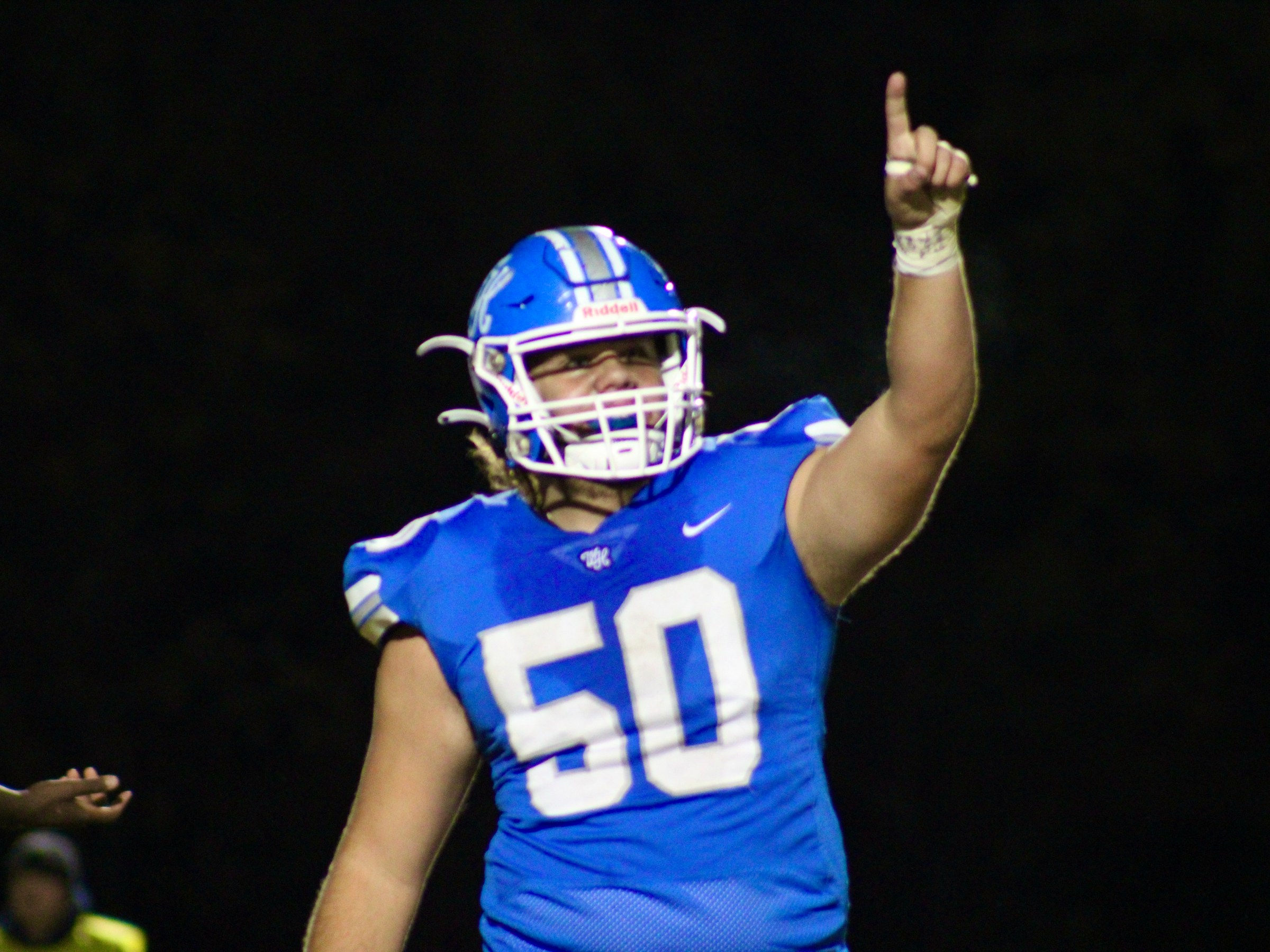 WHITE HOUSE – With three touchdowns and a short field on the first three possessions of the game, the White House Blue Devils put the defensive clamps on Stratford and cruised to a 20-0 victory at home in the first round of the Class 3-A playoffs.

Stratford bobbled the first and third kickoffs of the game, with Michael Albin recovering each one for the Blue Devils, and then Luke Kelton pounced on a loose ball inside 10 yard line when Kenny Holt put defensive pressure on the punter and he whiffed the kick, officially ruled a fumble.

White House scored on all three short fields, twice from the 30 and once from the 6. In each case, seniors plunged into the freshly painted checkerboard end zone from three yards away, with Reece McAfee, Ranen Blackburn and Montrel Black all getting a touchdown.

Bryson Harper was 2-for-2 on PATs, but a special teams slip on the third try resulted in an incomplete pass and the Devils held a 20-0 edge.

White House missed a field goal later in the game and fumbled the football away twice, basically choosing a vanilla offensive approach to run out the clock the remainder of the game. The normally high-powered Blue Devils did not have a big play for a score and did not throw a single pass.

Stratford on the other hand never got in sync and struggled to move the football. White House forced six fourth down attempts and stopped the Spartans all six times, including twice at the goal line inside the 10-yard-line.

White House quarterback Ranen Blackburn had just two rushes including once for a touchdown and punted twice for an average of 41 yards.

Cameron Dixon was 14-of-27 passing for 150, hitting Charles Troutt and Rashad Otis once each on long pass plays. But the Devils defense allowed only 174 total yards and eight first downs.

No defensive player made double digit tackles, but White House got big contributions from the defensive line. Cole Pitt made nine tackles, a sack and three tackles for losses at defensive end, and linebacker Luke Kelton joined him on the sack and had two tackles for losses and eight stops. Rick Buford and Montrel Black joined defensive backs Kenny Holt and Cade Hutcherson with seven tackles each.

Amarion Lucas had four tackles and three pass break-ups, but three separate times made a stop on fourth down to halt a drive.

Holt broke up three passes and Nathan Seipp two, and Seipp and Pierce Scholato had six tackles each.

Albin made one tackle, one forced fumble, one pass break up and two fumble recoveries on kickoffs.

Montrel Black went over the 100-tackle mark for his career.

White House is now 3-1 against Stratford all-time and this was the first playoff meeting and last matchup since 2001-02 when the Blue Devils won both games in the regular season.

It was the first playoff win for White House since 2017 over Chester County in the first round. White House then lost to Jackson South Side the following week.

White House advances to the Class 3-A second round and will host Smith County at Dewey H. Whitson Stadium on Friday, Nov. 12th. Kickoff is at 7 p.m. Tickets will be on GoFan for $8 with a cash option of $10 at the lower gate.

Smith County has been a thorn in the side of White House traditionally, one of the few teams with a winning record against White House. The Owls have knocked off the Blue Devils nine times in 16 tries.

The teams last played from 2009-12 and Smith County won all four, 21-14, 9-6, 35-12, and 21-0. All four of those teams were playoff teams and White House advanced to the Class 4-A quarterfinals in each of the final three seasons after a regular season loss to the Owls.

White House is looking for its first second round win since 2014 over Giles County. But from 2007-2014, White House won seven second round games in a row except for 2009 when the team lost in the first round. The Blue Devils were in the quarterfinals seven times in eight seasons.