Posted on February 16, 2022 by whitehousebdp 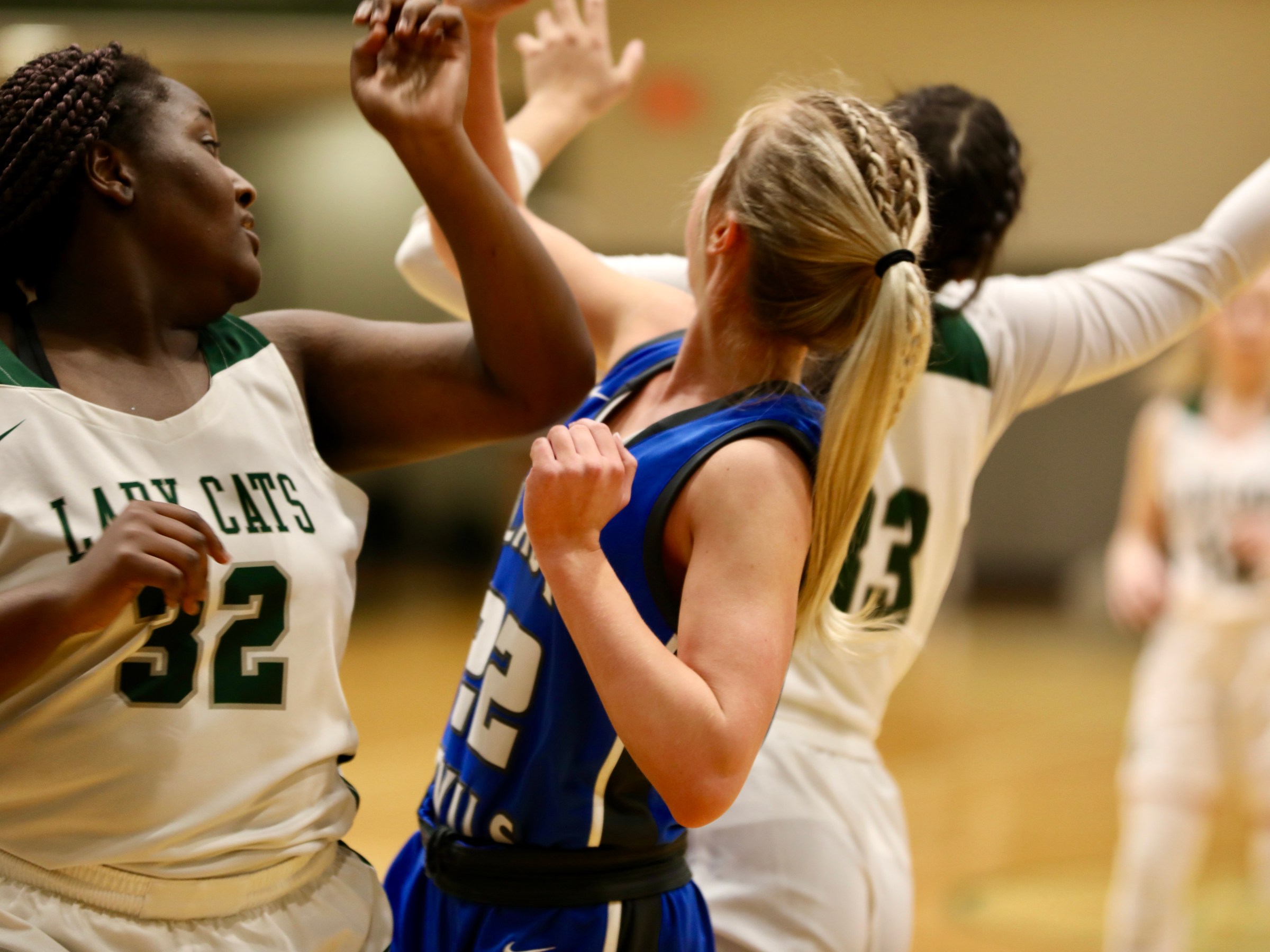 GREENBRIER – No matter what happened on the court Monday night at Greenbrier, the White House Lady Devils and the host Bobcats are scheduled to meet again Saturday night in the semifinals of the District 9-3A Tournament at White House.

That did not stop Greenbrier on their own senior night from nearly spoiling the White House party.

Audrey White’s left wing three missed on the back right of the rim with seven seconds to play and the Lady Devils escaped with a 49-48 win, after senior Chloe Hart stole the inbounds pass with 18 seconds to go and passed to senior Faithe Johnstone for the go-ahead bucket with 12 seconds left. White House trailed 42-31 with just over three minutes to go.

Sophomore Marley Hyde struggled with only six points and fouled out with under three minutes left in the game. Abigail Bradley added four points, and Sydney Richardson one, with Richardson playing valuable minutes in the closing quarter as White House was without backup senior post Hannah Crabtree, who has missed the last two games.

Greenbrier countered with 16 points from senior Ashley Marshall and 15 from sophomore Mackenlee Jones, taking the lead in a slow-paced games by hitting six of their eight threes in a three-minute span of the third quarter.

White House struggled to shoot, making just 32 percent from the field but just 7-of-18 at the free throw line and 0-for-15 from three. In a 64-47 victory over Greenbrier earlier in the season, White House hit seven threes.

Nevertheless, White House kept fighting back and the two seniors Hart and Crabtree put the Lady Devils on their back. After fouling Marshall and Jones late, White House watched as the Bobcats connected on seven of their final eight free throws to build a 47-41 lead with a minute to play. Marshall extended Greenbrier’s total to 48 with the front end of a free throw trip, but her final miss left the scoreboard at 48-43 with just over 30 seconds left.

Johnstone drove for an And-1 layup but missed the free throw, then White House stole the inbounds pass and Chloe Hart hit a put back off her own rebound to make it 48-47.

Greenbrier threw the ball in under a Lady Devils trap and Kendall Peterson was swarmed on the far side court in a double team. As Johnstone swatted the ball away, Greenbrier was granted a timeout to nullify the turnover and maintain a one-point lead with 18 seconds left.

On the ensuring inbound play from the same spot, Hart tipped the ball and came down with the steal, then turned and fed a wide open Johnstone on the left side of the lane for a bucket and the 49-48 lead.

The Lady Bobcats rushed down court with 10 seconds left and overthrew the entry pass, but Rielyn Freeman made a desperation save to White at the left wing. Her shot looked true but was just inches too deep on the right of the rim and White House knocked it out of bounds with 0.9 seconds left. Greenbrier inbounded the ball but the buzzer sounded before a shot attempt in the middle of the lane.

Now, 16-11 White House finished 6-2 in District 9-3A and clinched a two seed for the district tournament. No matter what happens in the postseason, White House has clinched its first winning season in girls basketball since the 2006-07 season when White House had back-to-back years of 20 and 18 wins, respectively.

Greenbrier fell to 8-18 overall and 3-5 in district play, avoiding the dreaded play–in game by holding a tiebreaker over Portland. The Lady Panthers will host Montgomery Central on Thursday, and the winner travels to district champion and district unbeaten Creek Wood on Saturday night.

White House will host Greenbrier in the 2-3 matchup at 6 p.m. with the winner advancing to the district championship game Monday at 7:30 p.m. and the loser setting for the consolation game Monday at 6 p.m. All games Monday will be played at Creek Wood.

Since a treacherous 0-5 slate in the Christmas tournament season, White House has won 9 of its last 12 games with two of the losses coming to Creek Wood and the other to Cheatham County in non-district play. White House and Creek Wood are both one win away Saturday night from a rematch on Monday.

No matter what, the Lady Devils have three games left to play at minimum: Saturday, Monday and then a trip to the Region 5-3A quarterfinals. Seeding will be determined by the district finish.