Posted on February 19, 2022 by whitehousebdp 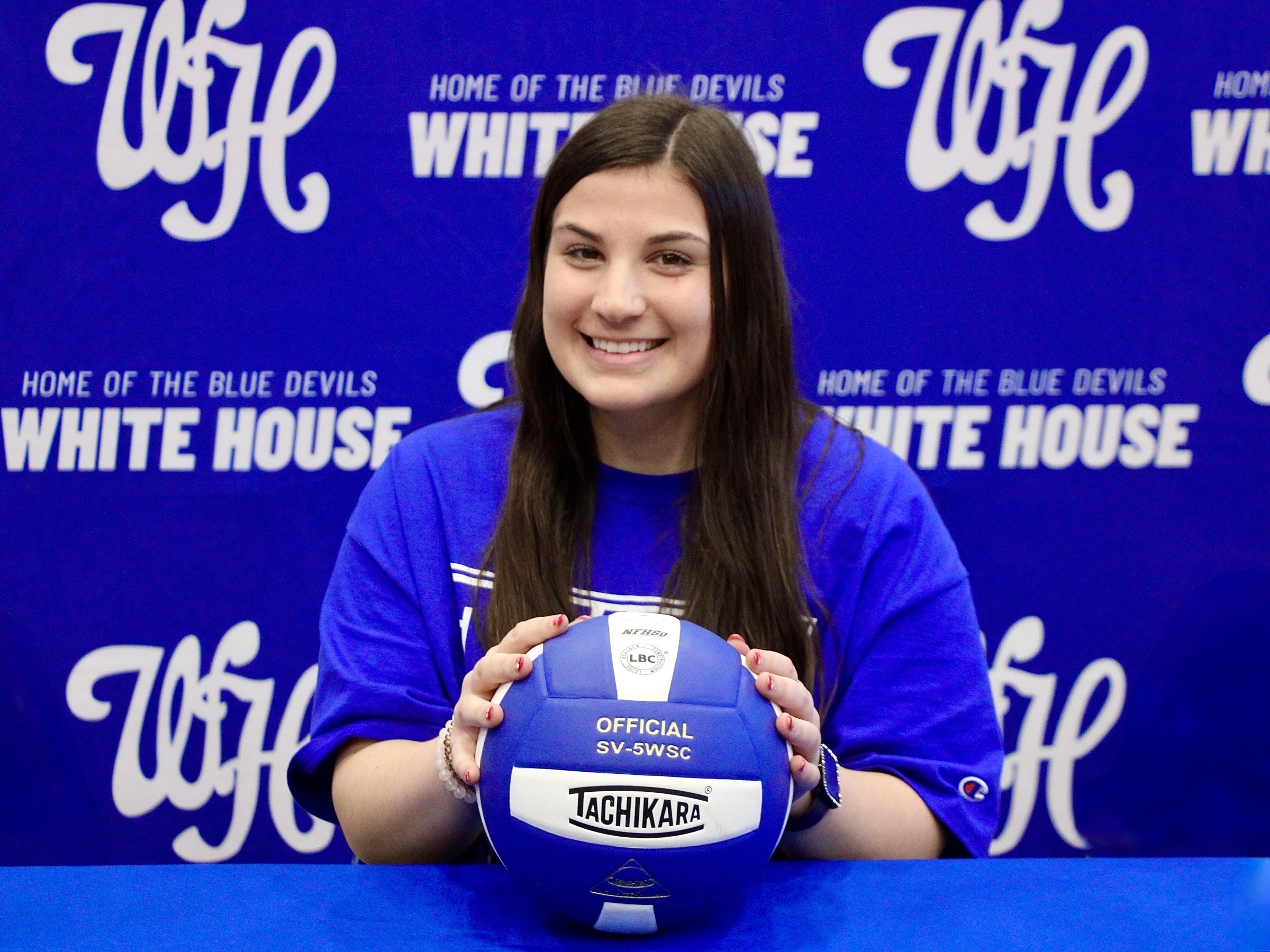 A ceremony planned for Thursday at WHHS was altered by inclement weather and moved from White House High School to Temple Baptist Church, after Sumner County Schools dismissed early due to heavy thunderstorms. But the Blue Devils joined Thompson for a second ceremony on Friday with students, teachers, coaches and teammates. So Thompson essentially was able to celebrate twice.

On Thursday night, she was joined by Tennessee Wesleyan new head volleyball Kylie Whaley, who was named to the position in January. Whaley takes over for the Bulldogs, who play in the Appalachian Athletic Conference of the NAIA. White House has two other athletes at TWU, including junior bowler Jacob Watts and freshman bowler Kyleigh Husted.

“Megan has always been our silent leader, always leading by example on and off the court,” said White House coach Dani Villafana. “She is a great all-around young lady and we are excited to see her thrive at the next level in all areas of her life.”

Thompson, a libero specialist for the Lady Devils, helped lead White House to its most successful volleyball season in 29 years, when White House finished just one match short of the state tournament with a loss at Lawrence County in the Class AA Sectional. White House was a District 11-AA and Region 6-AA runner-up. Thompson was the co-team Most Valuable Player with Justine Lowe, and both players were named All-District 11-AA and All-County by Main Street Preps.

Thompson played in all 26 matches for the Lady Devils.

“I think all of Megan’s teachers, coaches, friends, and family would agree that she is a driven and passionate young lady. Anything she begins, she puts all of her efforts into it until she succeeds,” said White House coach Kassie King. “In the classroom she is an exceptional student who has always valued her grades above all. On the court she leads by example and is passionate about the game and her teammates.”

Thompson is the school record holder in digs for a career, and finished her senior year with a single season total of 325 this year alone. She was second on the team with 445 serve receive attempts, with only 26 receive errors, and third on the team with 277 serves on offense and a serve success rating of 98.6 percent. She had a team-low four service errors among the regular starters on the team.

“In four short years Megan has become our top defensive player in WHHS volleyball history. She was part of a senior class who began their freshman year with large goals,” King added. “Together, they achieved those goals with the help of a group of younger players who believed in their leadership. Megan will be greatly missed but she is leaving behind a lasting example of what a leader and teammate looks like for our younger players.”

Thompson is the first volleyball player at White House to sign at the next level since Rachel Scott, a current junior defensive specialist at the University of the Cumberlands. Scott played her final season in 2017 at White House High School and she is a two-time Mid South Conference All-Academic Team member of the NAIA.

“The entire volleyball team and coaching staff is very proud and excited for Megan to begin her new journey,” King and Villafana stated. “We all have no doubt that she will excel in all aspects of her life. Good luck ’20’ and thank you for an amazing four years!”

← Devils light it up from downtown on senior night
Wrestling: Morris hits the mat for the TSSAA State Tournament →