Wrestling: Morris hits the mat for the TSSAA State Tournament

Posted on February 20, 2022 by whitehousebdp 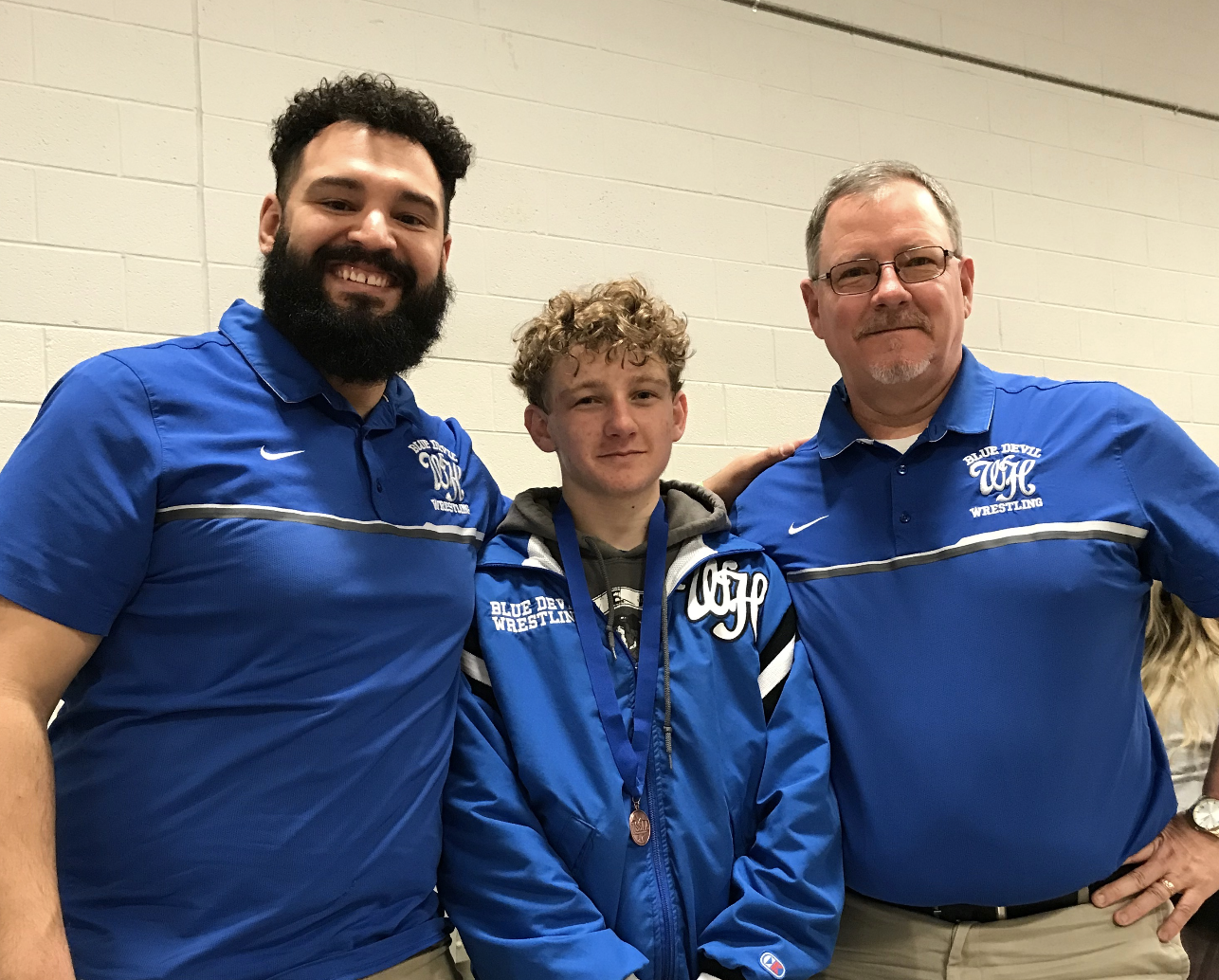 Morris finished fourth in the 113-pound division and will wrestle next week at the TSSAA State Tournament at the Williamson County Ag Expo Center on February 24-26 for the TSSAA Division I individual matches. White House has one state champion in wrestling history when Ethan Rainey recently accomplished the feat in 2019, but the Blue Devils have a strong track record of individual state tournament qualification.

Morris defeated Jackson Harris of Community by pin fall of 57 seconds in the quarterfinals, but then lost to Nathan Simpson of Page in a semifinal pin fall of 2:26. Morris earned his way into the state round by winning the consolation semifinal, defeating Jacob Morse of Tullahoma in a 10-4 decision. In the final match of the day, Morris medaled with a fourth place finish but fell to Isaac Williams of East Robertson in an 11-4 decision.

For the season, Morris is 26-11 and was a second place qualifier in Region 5-A.

The sectional round is new to individual wrestling for the TSSAA with the reclassification of teams prior to this season.

“We are very proud of all of our young men that advanced to the sectional round,” said White House wrestling coach Mark Lamberth. “It is new to us and everyone else in the state of Tennessee in wrestling. To make the state tournament this year is more difficult than in recent years. For our freshman at 113 pounds, Cameron Morris’s to advance to the state is quite an accomplishment.”

In past years, the region would have qualified wrestlers for the state tournament, but now the format has changed and White House sent six total to the sectional round. Five others battled hard for the right to go to state. The group included Morris, two other freshmen Mason Mejia and Adan Salazar, juniors Cade Hutcherson and Haden Cooper, and lone senior Tanner Carpenter.

“I do want you to credit Coach (John) Hill with his work with all of our wrestlers this year,” Lamberth added. “Having such a young team and advancing six to the sub-state is a great reflection on his hard work and dedication.”

Freshman Adan Salazar finished his season with a 1-2 mark in the sectional, losing in the quarterfinals and winning a round one consolation match before falling in the consolation semifinals. Competing in the 126-pound division, Salazar fell to Caleb Adkins of Tullahoma in 35 seconds, then defeated Cannon Drake of Page by forfeit before losing to Vayden Moore of Cascade in a long pin fall match of 4:16. Salazar had qualified for the event with a fourth place finish in the region. Salazar finished 6-22 overall.

Junior Haden Cooper fell in the quarterfinals to Jacob Pennington of Eagleville by pin fall at 2:24, then to Alex Taylor of White House Heritage in the consolation round one by fall of 3:44. Cooper was competing in the 132-pound division. Cooper had an impressive run to the sectional, defeating Addison Hassler of Greenbrier last week in the region semifinals and finishing second behind Ryan Leonard of Upperman in Region 5-A. Cooper is 20-13 overall.

In the 138, White House junior Cade Hutcherson dropped his quarterfinal match to Beau Banks of Tullahoma in 3:38, then lost to Kevin King of Watertown in 2:15 in the consolation round one. Hutcherson finished 29-16 with 21 pins after a second place regional finish. Like Cooper, Hutcherson won his regional semifinal over Nathaniel Slough of White House Heritage, but finished second in Region 5-3A to Green Hill’s Harrison Bartoshesky.

Senior Tanner Carpenter lost his quarterfinal match in the 170-pound division to Dylan Pratt of host Eagleville in 1:21, but advanced with a bye to the consolation semifinals and fell to Cadan Avans of Tullahoma in 2:07. Carpenter finished third in the Region 5-A meet to make it to the sectional round. Carpenter finished 10-8 overall.

Freshman Mason Mejia competed in the 220-pound division and fell to Cole West of Cascade in 2:20 in the quarterfinals and then to Evan Saddler of Watertown by pin fall in 43 seconds in the consolation round one. Mejia, as did Carpenter, finished third in Region 5-A. Mejia is 12-25.