Posted on February 26, 2022 by whitehousebdp 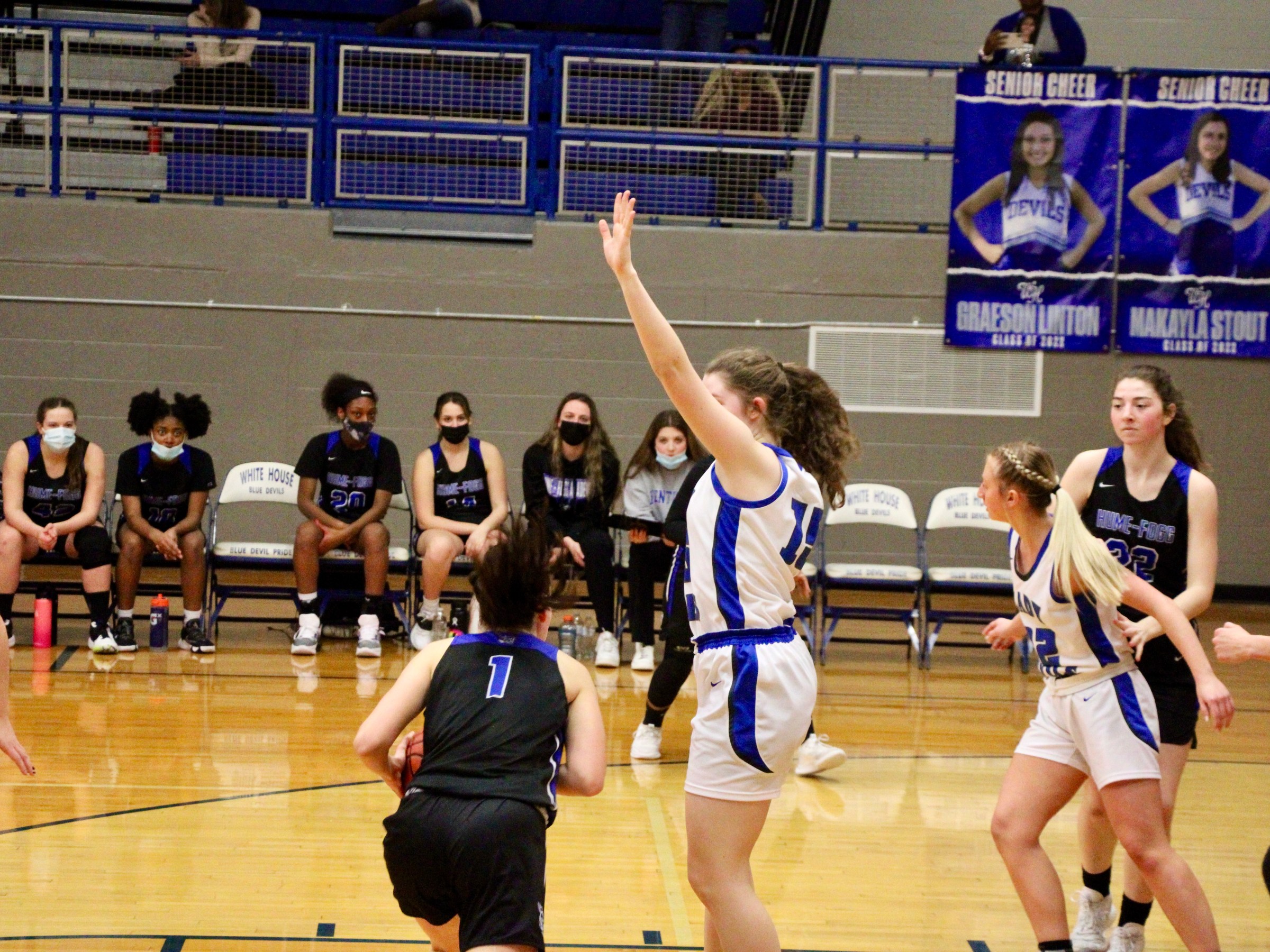 WHITE HOUSE – The third time was still the charm for White House on Friday night against Hume-Fogg in the Region 5-3A quarterfinals at home.

The Lady Devils completed a three-game sweep of the Lady Knights this season, with a 63-54 win, and advanced to the Region 5-3A semifinals for the first time in 28 years for a girls basketball team at White House High School. The 1994 team won its quarterfinal matchup before losing in the semifinals to Macon County.

Since that time, White House had lost five straight regional appearances in 2001, 2006, 2007, 2008 and 2021, but this year’s squad achieved its 18th win of the season to set up a showdown with Region 10-3A champion Murfreesboro Central Magnet on Monday at Maplewood.

White House would need to win its next two to earn another home game next Saturday, but for now it could be the final time on the home floor for seniors Chloe Hart, Faithe Johnstone and Hannah Crabtree. It would take a region championship conquest for White House to play again at Jeff Bennett Gymnasium.

Junior Carmen Perkins had a career high 16 points for the Lady Devils, including 6-of-8 shooting and six rebounds. She got help from senior Chloe Hart with 13 points, and another double-double from Marley Hyde, who dropped in 12 points and 12 rebounds to continue her double-double pace for the season.

Seniors Faithe Johnstone and Hannah Crabtree each had eight points, including a perfect 4-of-4 night for Crabtree. Abigail Bradley scored six points and had seven rebounds for the Lady Devils.

White House fought off a career night for Hume-Fogg senior Elisabeth Peebles, who scored 35 points and made 10 threes. But she did most of her damage after White House turned a 17-15 game into a 22-point lead in the third quarter with a 20-0 run starting just before halftime.

White House previously beat Hume-Fogg 50-25 and 57-23 this season, but Peebles did not play either of those games. Even still, the Lady Devils held on late and the closest the Knights came was eight points before an athletic play by Perkins immediately pushed it back to 10.

Facing a full court press after a Peebles made three, White House nearly turned it over at halfcourt when three players scrambled to the floor after a loose ball. Perkins picked it up between her feet and fed the ball down low for a basket, and Hume Fogg was never able to get it down to eight again.

Peebles hit a three at the buzzer to get the game inside double digits for the final.

White House is now one of 32 teams remaining in Class 3-A. The Lady Devils will advance to Monday’s semifinal round at Maplewood High School, playing in the late game at 7:30 p.m. The first game features District 9-3A champion Creek Wood and 10-3A runner-up Maplewood, after Creek Wood disposed of Valor Prep 72-15, and Maplewood beat Greenbrier, 47-29.

On the opposite side of the bracket, White House advanced to face Murfreesboro Central Magnet, a team sitting at 23-5 after a 57-27 win over Portland. Central Magnet is ranked 17th in Class 3-A despite the 72nd ranked strength of schedule out of 82 teams.

Still, the Tigers have won 19 of their last 20, with a loss 51-36 loss to Community on February 7th. The other four losses were also to ranked teams, including Lipscomb Academy, Cookeville, Warren County and a second loss to Community. Central Magnet beat Hume-Fogg by 17 and 18 in two games.

White House came into last night’s game ranked just 32nd in Class 3-A and the 39th ranked strength of schedule out of 82 teams, but six of the teams ranked ahead of White House on Friday lost in the quarterfinals and are eliminated.

Eight of White House’s 12 losses are to ranked teams, including three to district champion Creek Wood. A win on Monday, and White House would bet set up for a potential fourth game against the Red Hawks on Wednesday.

Monday is an elimination game and Wednesday is not. Both of Monday’s winners earn a Region 5-3A championship berth plus an advance to the sectional round of 16 on Saturday. The region championship determines home and away decisions for Saturday.